Here're some drawings from when I was gearing up to make that original Cowman cartoon. 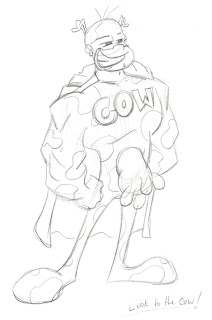 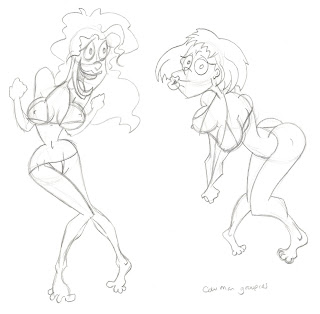 You can see Cowman didn't change a whole lot but the differences are definitely noticeable, the squinty eyes make him look a lot more thoughtful...though not necessarily smart.  His chin isn't as defined and his nose isn't quite as pug...he's actually a much more heroic looking character in this incarnation.  And he doesn't have hoof shoes...I like the hoof shoes I'm glad I added them.  The girls are pretty incidental...I was still playing with story ideas when I drew these and I was gonna make more of a point out of the girls swooning all over him, but the idea eventually devolved into some Cowman cheerleaders in the background.  These girl drawings aren't particularly good, I wanted to really over exaggerate them and almost make a joke out of their hair and boobs being so ridiculous, I didn't really explore the idea too far, not sure it would've worked. 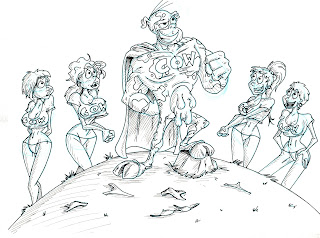 Here's the uncoloured version of what ultimately ended up in that cartoon.  He's much more defined here and you can see I defined him even further for the comic.  You also won't see girls like this hanging around him in the comic too often either, I thought it was a lot funnier to make him kind of a dork.
Soon I'll post some early artwork of Bullzerk, believe it or not that character actually predates Cowman by at least 10 years.