The Making of a Cowman Comic

Ever wonder what goes into making a Cowman comic?  No?  Well this awkward...

I work out the plots pretty far in advance so that I can plan the bridging story arcs...but those plots are pretty vague to start with.  #56 "Benched" started like this:

Sometimes I'll hand write ideas next to it somewhere if a joke or a line of dialog occurs to me but not always.  It's not until I'm ready to start drawing it that I actually work out the details.  In the case of 'Benched' working out those details came pretty easy.  If you've ever waited for the 160 bus from downtown Vancouver to Port Moody in the middle of the night you'd have some decent material for a story like this too.  While you're waiting ever so patiently the 135 to Simon Fraser University goes by about 50 times before your bus does.  Evidently SFU students travel more often then a secret agent in the cold war.  That 135 always appears in the distance, just too far off to read the number and holds there just long enough to get you excited that your bus has finally arrived.  Then it shows up and dumps disappointment on you like slime at the Kids Choice Awards.  The 135 is really majestic and inviting, it probably smells like strawberries and has cute girls that serve free beer.  With the 160 you get a 400 pound Goth sprawled across the back bench, but it takes you home.  But anyway back to the comic...I work it all out in a rough thumbnail drawing like this. 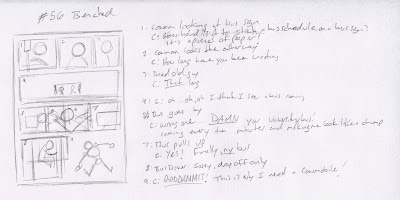 Then I'm ready to draw the thing for real, here's what that looks like: 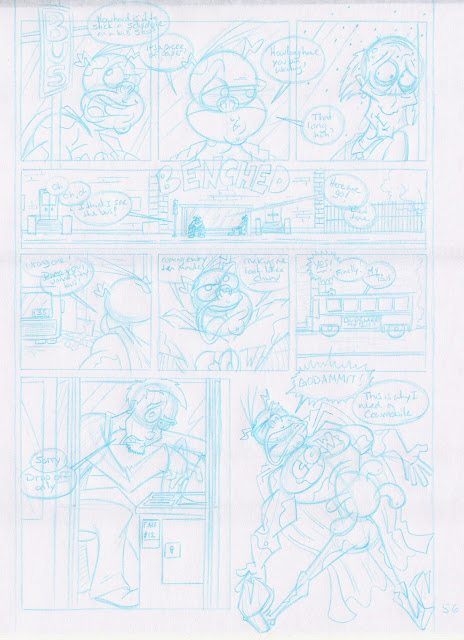 You astute readers might notice that those lines are blue.  I just can't get anything passed you, can I?  I draw all the comics with a blue mechanical Col-Erase pencil.  I've gone through at least half a dozen of them in the passed couple years.

I use this pencil so I scan the drawing after I've inked it and the scanner won't pick up the blue construction lines.  I ink them with felt tipped Pilot fineliners, and I fill in all the big black areas with a Sharpie.  I used to have a decent art pen for this stuff but I couldn't find refills for it anymore and couldn't find a replacement I was happy with until I started using a Pilot one day cuz it was all that was around.  If Pilot or Sharpie wanna send me a bunch of free pens I'm not gonna stop them...I burn through a lot of these things. 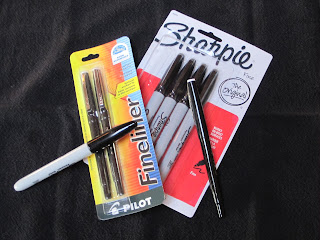 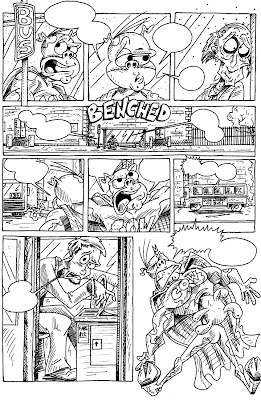 I always scan a clean version like this before I do shading so that I can colour it easier somewhere down the line should I decide to.  For the site though I like to do some shading with gray Prismacolor markers. 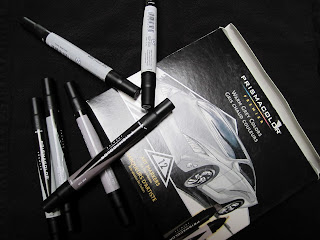 These markers are pretty slick but the labels on them suck.  The gray you see on the sticker is nothing like the gray that winds up on your paper.  I numbered my markers to avoid headache, 1 being the lightest and counting up to the darkest.  I wrote the number on the sticker dot on the cap...use a permanent marker though, I used a Unibal and it smudged pretty good on the glossy sticker. 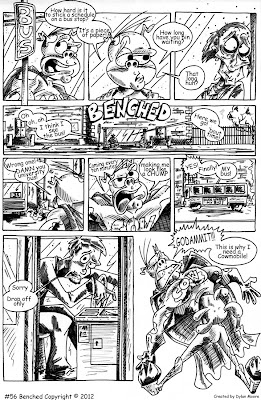 I don't get too intense with the markers.  I like to give the impression of shading but doing a full render would be pretty intense given the number of comics I crank out.  I keep it simple and assign a shade to every surface and just shade the edge around my crosshatching, I only rarely even blend the markers.  Colouring with these markers is a lot of fun though by the way when you do go the whole nine yards and blend and everything.  I'd love to do some more colour work with markers but you gotta stock up on a lot of variety to really get detailed with it.
So there ya go...way more then you ever asked to know about the making of a Cowman comic.  The lettering as you may have guessed is added in Photoshop.
Posted by Dylan at 23:38

Email ThisBlogThis!Share to TwitterShare to FacebookShare to Pinterest
Labels: art, behind the scenes, concept art, drawings, how to, making of